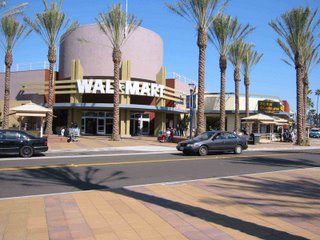 This is the first in a long series of planned postings intended to demonstrate that a whole slew of major retail chains can — when they want to or are “induced” to — come up with attractive designs for their downtown stores that encourage pedestrian traffic and cross-shopping, while not visually violating the urban fabric. My goals in these postings are to:

For many downtown leaders and activists, Wal-Mart is Public Enemy No.1. It is, therefore, very interesting that Wal-Mart opened in 2002 a very out of character store in CityPlace, a mixed-use development in the heart of downtown Long Beach, CA. (See photo:double click on it for larger view.) This development has 450,000 square feet of retail space and 341 residential units. Retail tenants include Wal-Mart, 134,147 square feet, Albertson’s, 57,945 square feet, Sav-on, 14,884 square feet, Nordstrom Rack, 29,945 square feet, Ross Dress For Less, 28,073 square feet, and scores of smaller operations occupying the remaining space.

The fact that Wal-Mart is anchoring a major downtown open air shopping center with many small stores opening nearby is in itself out of the ordinary. However, the design of the store is also unusual in that it tries to avoid long dead walls, incorporates other stores in an attached “sleeve” and provides parking in a nearby garage. The design seems intended to allow the smaller store to benefit from the customer traffic Wal-Mart generates.

The CityPlace Wal-Mart overcomes the design problems of the Wal-Mart in downtown , where a huge parking lot in front of the store serves as a moat separating it from the rest of the downtown.

If Wal-Mart can come up with this type of store design in , then it is reasonable to demand that it provide store designs of similar quality and sensibility in other downtowns.

If Wal-Mart can do it, then it also is reasonable to demand that other retailers do the same. As I will try to demonstrate in future postings, many, many retail chains are quite capable of opening stores with downtown friendly designs — unfortunately, they often have to be banged over the head to do it. Often, problems are generated not by the rertail chain, but by the developer or franchisee.